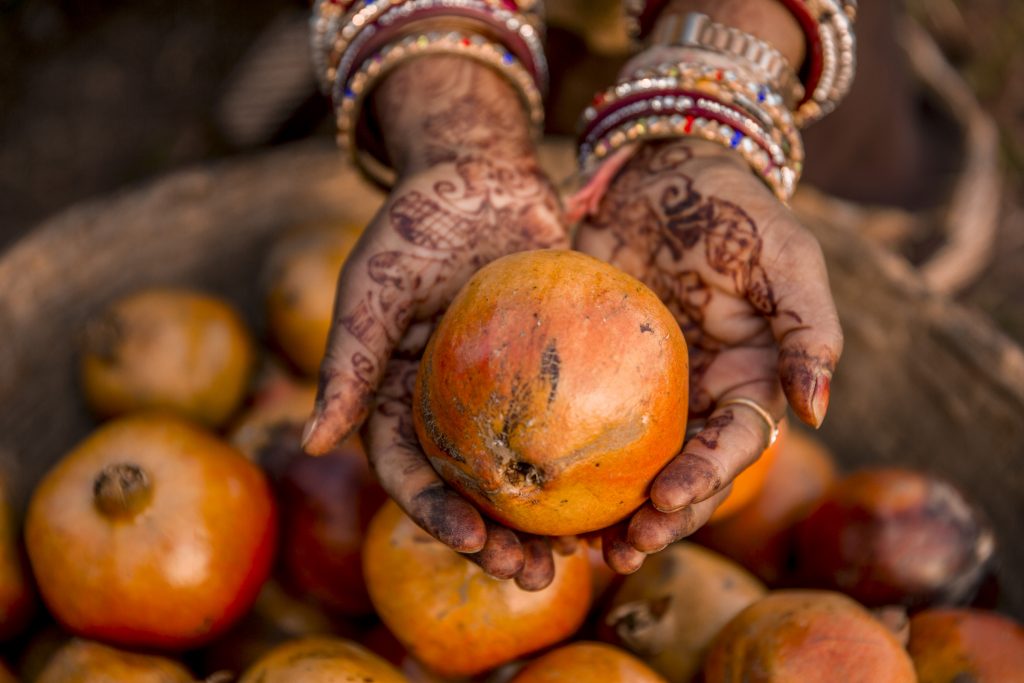 JIVA Case Study: The Pomegranate Story of Innovation and Resilience

The Freedom to Innovate

JIVA’s pomegranate initiative embodies the project’s innovative and inclusive approach of working with farmers to improve livelihoods in a sustainable manner. In parallel with adopting agricultural best practices to improve the yields of staple crops—cotton, maize, sorghum, and wheat—the JIVA team also tested climate-appropriate crop diversification options that would bolster farmer incomes and enhance resilience. During one of these experiments in 2013, JIVA distributed 600 pomegranate plants to four farmers, who were asked to intercrop the saplings with their cotton crops. At the time, initiating a new crop early in the program in a resource-constrained environment1 resulted in a less than 1 percent survival rate of saplings.

Confident in the potential value of pomegranate in the JIVA villages, the team analyzed the process used to introduce the new crop, worked with farmers to identify key constraints, and devised the following approach to assess pomegranate:

JIVA’s due diligence and collaborative approach to reducing barriers to farmer entry facilitated the rapid adoption of pomegranate during the following years. The market study and farmer exposure visit were critical in substantiating JIVA’s trainings and legitimizing pomegranate’s income-generating potential in the opinions of farmers. JIVA focused on lowering farmers’ investment risk through innovative intercropping techniques and a partial subsidy, while also ensuring farmer commitment through their financial contribution. Most importantly, as JIVA entered into its second, third, and fourth years, farmers developed a strong rapport with the JIVA team through various other trainings, exposure visits, farmer fairs, and community events. The trust built between JIVA and the farmers, when combined with an improved approach, has motivated an increasing number of farmers to adopt pomegranate and become model farmers within the JIVA villages and throughout the region.

The Advantages of Intercropping

Led by a handful of entrepreneurial farmers, many of whom attended the first exposure visit to Gujarat in 2014, farmer interest and uptake of pomegranate has accelerated within the JIVA villages. From 2014 to 2016, over 100 farmers attended JIVA trainings4 on pomegranate cultivation, resulting in 13,000 saplings being planted by 50 percent of households in the JIVA project area. Ninety-nine households planted an orchard of at least 20 saplings, with the remaining households choosing to plant a few saplings for household consumption before investing further. One hundred percent of the farmers who planted orchards followed JIVA’s recommendation to intercrop their pomegranate saplings with existing crops or use available, non-cultivated land. JIVA’s emphasis on intercropping enabled farmers to overcome resource constraints, as they did not have to allocate land specifically for a pomegranate plantation, install extra irrigation, or invest in additional resources, except fertilizer, during the planting season.

While the majority of pomegranate crops will not be ready for a full harvest until 2019-2020, observations from early adopters are promising. During the initiative’s third year, farmers who intercropped pomegranate with their wheat or fodder crops earned net incomes on par with a cotton-wheat cropping system, traditionally the most profitable cropping scheme that produces an average net income of $1,465/bigha per year.5 Farmers’ dedication to intercropping during this transition period is key to earning income from multiple sources until their pomegranate orchards are fully mature, which occurs during the crop’s fifth year.6 When fully mature, the income potential of pomegranate per bigha increases to $4,588, or more than three times that of a cotton-wheat cropping scheme.

The Value of Resiliency

Extreme weather events in recent years have elevated the value of pomegranate’s resiliency in the JIVA project area, when compared to traditional crops. In 2015, a regional drought reduced farmers’ ability to irrigate and cultivate traditional crops. For example, in Morra village, the area of land available for wheat cultivation decreased by 50 percent. In 2016, a flood caused half of farmers’ sorghum crops across the project area to fail, and vegetable farmers with low-lying fields lost 100 percent of their crops. Farmers’ pomegranate plants, on the other hand, were able to withstand the water scarcity and flooding, even in fields that remained under water for over one month.7

The market stability of pomegranate, which on average maintains a more consistent price than vegetables or cereals, helps mitigate potential risks and provides security for farmers. Farmers can also choose to diversify their weather and market-related risks by harvesting portions of their orchards over the course of the year.8 In the JIVA villages, as is the case with many smallholder farmers, farmers’ wealth is often stored in their agricultural infrastructure and seasonal harvests. Pomegranate’s ability to persevere, despite extreme weather events and market shocks, increases the security of wealth for farmers who have little to no monetary reserves for unexpected expenses.

The potential value added by cultivating pomegranate, in terms of increased income and resilience, is an exciting opportunity for farmers in the JIVA community. With more farmers planting pomegranate and the mature plants starting to bear fruit, initial returns indicate that the crop will generate considerable income for the local economy. In 2016, two farmers who adopted pomegranate early sold small quantities in the local market to earn a combined income of $2,058. In 2017, an impressive 14 farmers harvested significant amounts of pomegranate, with six farmers choosing to sell a portion of their harvest for a total of $14,000. When mature, a conservative calculation estimates that the current pomegranates planted in the original JIVA villages have the potential to increase farmer incomes in the project area by $340,000 annually.

$340,000: The projected annual income increase in the JIVA project area from the production of mature pomegranate crops.

Over the coming years, the JIVA team will continue to closely monitor farmers’ progress and identify ways to add value to their efforts. The positive results and optimism from pomegranate adoption have encouraged farmers, on their own initiative and without subsidies from JIVA, to plant over 700 guava, 1,000 lemon, and 1,500 papaya trees. The promise of pomegranate as a high-value and resilient crop has also spread to villages outside the JIVA zone, as farmers in over 10 neighboring villages have followed the example of JIVA farmers to plant a total of 8,344 pomegranate saplings.

In 2017, JIVA expanded its geographical scope from Sakrawas panchayat, consisting of Morra, Madara, and Sakrawas villages, to include Junda and Lapsiya panchayats.9 JIVA’s approach to promoting pomegranate in the new panchayats draws on the same core tenets used during its successful efforts with the original three villages. The project team continues to conduct scientific and market research, which it conveyed to new farmers in July and August 2017 via trainings and exposure visits. JIVA offered partial subsidies to new farmers, encouraging 38 farmers to purchase a combined 4,787 saplings. Farmers’ rapid adoption of pomegranate in the new panchayats indicates that the social capital between JIVA and the communities has expanded well beyond the original project area and has resulted in program efficiencies. The pomegranate orchards of JIVA’s early adopters, such as Kishan and Chanda, have become model farms in the communities and are regularly visited by new JIVA farmers during intra-JIVA exposure visits.10 As JIVA continues to partner and build trust with the local communities, it hopes that farmers will continue to rapidly adopt agricultural best practices, including the cultivation of pomegranate as a staple crop, to reap the benefits of higher incomes and more secure livelihoods.

1 Farmers in the JIVA area typically depend on their small or marginal land holdings as the primary source of food and income for their families and are therefore often risk-averse to unfamiliar agricultural practices.
2 Pomegranate is well-suited to Rajasthan’s semi-arid climate. The crop has the ability to grow with limited water and thrive in mixed soil quality.
3 Rather than advising farmers to plant in their cotton crops. These crops are lower to the ground and provide less competition to pomegranate plants for soil nutrients and sunlight.
4 Trainings on pomegranate best practices including innovative intercropping techniques and land management, integrated pest management (IPM), and weed management.
5 All monetary amounts are listed in USD Purchasing Power Parity (PPP).
6 JIVA recommends that farmers intercrop their pomegranate plants until they reach full maturity in year five. Pomegranate plants require approximately three years to reach 40% of production capacity.
7 Fifty percent of pomegranate plants survived in fields that were flooded for over a month, while vegetable crops were completely destroyed.
8 Depending on when pomegranate flowers are allowed to bloom into fruits, pomegranates can be harvested in March/ April, July/ August, or October/ November.
9 A panchayat is a government-defined district containing approximately 5,000 people.
10 An “intra-JIVA” exposure visit is when JIVA farmers travel to another JIVA farm to see and understand the successful pomegranate and intercropping practices of a farmer within the project area. Whereas exposure visits were initially external to the JIVA project area, the first intra-project exposure visit occurred in December 2015 as JIVA farmers adopted best practices and became model farmers.

PrevPreviousJaipur Rugs: Demystifying Fortune at the Base of the Pyramid
NextT I E Initiative: Infusing African Artistry into the World of Fashion and Interior DesignNext
See All News & Views